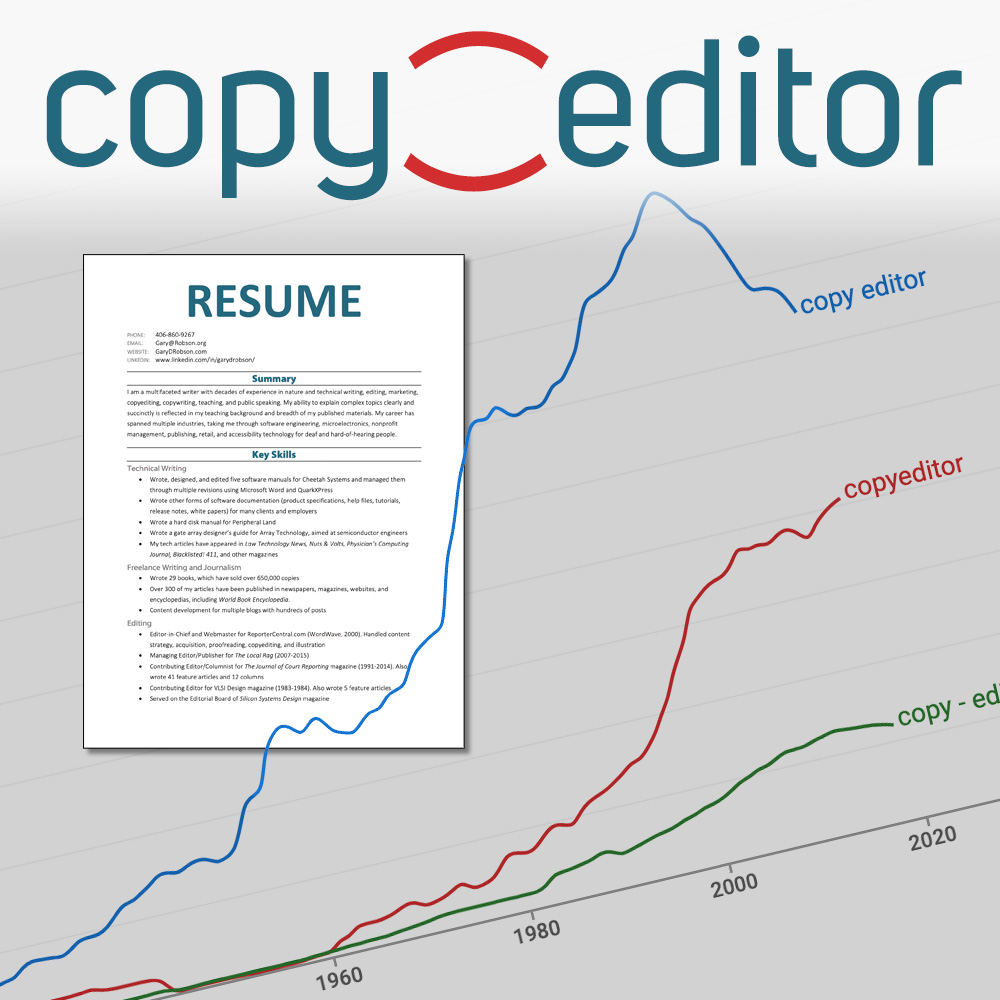 Oh, the strange dilemmas we encounter when writing a resume! I’m searching for a new job at the moment, and I keep getting dragged off into different rabbit holes of research as I work on my applications. This is the latest one.

Everybody knows you should carefully proofread your resume to avoid spelling or grammatical errors, and that counts double if your listed skills include proofreading or copyediting. But what should be your final authority on what constitutes an error?

I was doing some cleanup on my resume a few days ago, and used the ZipRecruiter “Instant Resume Report” to see if it offered any tips. Imagine my surprise when it said I had three spelling errors! I scrolled down to see what was going on and found this:

I was sure it was one word (notice it didn’t flag copywriting or proofreading), but I figured I’d better check. I’m generally a Chicago Manual of Style guy, so I whipped out my CMoS and looked it up. Yep. Copyedit and copyeditor are both single words. But then I went a bit deeper.

How about the venerable Oxford English Dictionary? It made it even worse. The OED says that copy editor is two words, but copy-edit is hyphenated!

I’ve faced this issue before. See Sacrificing Style Guides for Clarity for that story, which centered around die and dice.

As the English language evolves, many phrases go through a transition. They start out as two words, then become hyphenated, and finally end up as a single word. The hyphenation phase has been shortening in recent years, but the U.S. and U.K. evolve at different rates, and often just agree to disagree.

I decided to resolve the issue for myself using n-grams (thanks to Erin Wright for the idea). For those unfamiliar with n-grams, they are an excellent way to analyze the use of particular words or phrases over time and look for trends. Google has a handy tool for generating n-grams based on usage in its extensive catalog of books.

I’m sure n-grams won’t appease the prescriptivists among you, but when I can’t find consensus among the authorities, descriptivism is the only way to go! Let’s see which is the most popular form…

Using n-grams, it became quite clear that the one-word version of copyedit became the most popular in the early 80’s, and copyeditor wasn’t far behind.

It’s not quite so clear when it comes to the job title:

There’s a clear trend here, with the two-word version of the title taking a sharp downturn in 2008 as the one-word version continues slowly growing in usage.

What to do? I’m certainly going to use the single-word spellings for copyedit, copyediting, and copyeditor unless I’m writing for someone that specified AP style. That doesn’t help on the resume, though. Maybe there’s one final authority to draw from: ACES: The Society for Editing, which identifies itself as the nation’s leading organization of editing professionals.

There’s a post on their blog discussing this very dilemma, and while the author doesn’t come right out and tell us which version to use, I find it quite telling that she spells it as one word throughout the post. She also makes reference to the newsletter Copyediting, which changed its name from Copy Editor in 2007.

My daughter, who has done quite a bit of copyediting herself, recommended spelling it as one word and adding a parenthetical at the first use, perhaps with an explanation. Something like, “copyediting (or copy editing if you prefer AP Style).” That would have the advantages of catching the keyword search either way and of showing my awareness of style guide usage. But it sounds a bit snarky, so I think I’ll save that for interviews or cover letters.