← How important is the word “organic”?
Twinings changes their Earl Grey. Stop the presses. Or don’t. → 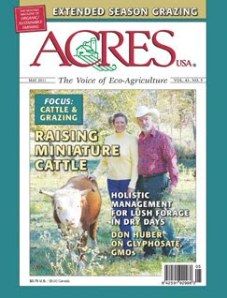 [This article first appeared in the May, 2011 issue of Acres U.S.A. magazine.]

Although doctors and nutritionists encourage lower-fat diets, most Americans prefer higher-fat beef. Breeders, wishing to cater to the wishes of their audience, continue to produce relatively high-fat beef cattle. For those who like their beef on the lean side, however, there is an alternative: a lean, athletic, lower-fat breed called the Corriente.

The History of the Breed

When the New World was being settled by the Spanish, they brought along many of the things they considered necessities of life. Among those were Spanish cattle. In November of 1493, Columbus, on his second voyage to the Americas, brought cattle to Hispaniola, and herds were established there. In the 1500s, Cortes (among others) took these cattle to Mexico, where herds were largely left to roam wild. Natural selection in the harsh deserts of inland Mexico helped to refine a hardy breed we now know as Corrientes.
Corriente cattle were considered beef cattle until well into the 1800s, when modern beef cattle based on other European breeds displaced them. Corriente cattle, known as Criollo cattle in Central and South America, were all but abandoned. A few of their cousins, descended from those same Spanish cattle, still exist in Florida — where they are known as Scrub cattle or Cracker cattle — and Louisiana, where they are known as Swamp cattle. Texas Longhorn cattle were developed from the same original stock, but those bloodlines diverged centuries ago.
As rodeo rose in popularity, people grew interested in Corriente cattle again. They are athletic, small, and lean, with prominent horns that grow out and then bend forward. The horns are easy for a bulldogger to grab or a roper to catch a loop on. As interest built, a breed association was formed, and the food value of Corrientes was rediscovered. The N.A.C.A. (North American Corriente Association) now has over 500 members, and you can find Corrientes all over the United States.

Corrientes are known as “easy keepers.” Unlike Angus cattle, which are brought into the barn and carefully watched during calving, Corrientes often wander off in the field and have their calves on their own. During the time I raised Corrientes, I didn’t even own a calf puller, and didn’t set my alarm during the night to check on the pregnant cows, as most of the Angus ranchers in my area do.
A mature Corriente cow is typically around 700 to 800 pounds, yielding 400 to 500 pounds of beef. Because of their smaller size and the breed’s origins in the wild, they consume considerably less food and water than today’s big beef cattle, and will wander farther if given the opportunity. They will also subsist on scrub and poor-quality hay that might founder other breeds, but if you’re raising them for meat, you’ll get better results with high-quality feeds.
They are generally easy to tame and non-aggressive, although a bit flighty. I made a point of handling all of my calves as soon as possible after they were born, and touching the cows whenever possible to keep them used to being handled. My children were also encouraged to handle the calves, and we never had a problem with mamas getting defensive.
Bulls, of course, are bulls, which means they can be aggressive. If you intend to show Corrientes or sell them into the rodeo market, you must leave the horns on, and any half-ton animal with horns can be dangerous. We had a secondary reason to leave the horns on our Corrientes: protection. We live in an area with a lot of large predators, including grizzlies, wolves, and mountain lions, all of which can take down a small cow. The horns give them some measure of protection.
The large horns have side effects on the cows as well. More than once I had to remove a Corriente’s head from a fence or gate. This is where the time spent gentling the cattle paid off. In one case, after a half-hour of wrestling with a heifer to twist her head out, I ended up having to cut a bar out of a metal gate with a hacksaw. In another case, I had to remove two boards from a fence when a yearling bull got his horns stuck in it. Both animals were panicked and would have been likely to hurt me had I not been able to calm them down a bit as I worked.
Unfortunately, some of the same characteristics that make Corrientes easy to raise and feed make them harder to contain. They can easily jump fences that heavier, slower beef cattle wouldn’t consider. I have watched small groups of them trot across a field and jump a traditional four-strand barbed wire fence without breaking stride.
It can be tough separating your bull(s) from the cows. We found it easier to buy a young bull and fatten him for the freezer after he finished impregnating the cows than to keep them apart after breeding.

The author's cat, Lena, pulls some cows & calves together for a picture.

The first thing you need to watch out for in buying Corriente cattle is the word “Corriente.” Many Mexicans use the term to refer to any horned small cattle of unknown breeding. What we call “Corriente,” they would call “Criollo,” or in Baja California, “Chinampo.” If you’re buying in the U.S., your first contact should be with the N.A.C.A., which can connect you to certified breeders.
Like any breed association, the N.A.C.A. handles registration of cattle, and they publish their member list on its website. If you are only buying Corrientes for your own use, this is obviously optional. If have any intention of selling your cattle, however, it’s well worth spending a few extra dollars to buy registered Corrientes and transfer the registration.
Although the original Corriente bloodlines are long-since lost, the N.A.C.A. is working hard to establish the concept of “pure” Corriente cattle.

Some ranchers are looking for ways to preserve the higher fat content that the American markets look for while gaining some of the advantages of the Corriente breed, such as easy calving and lower feed requirements. One such rancher is Jim Morgan, of Bridger, Montana.
“I got into the crosses by accident,” Morgan told me. “I had a herd of Corrientes and a herd of black cows. Once the Corriente bull finished his side of the fence, he jumped over and went after all the Angus cows. I just couldn’t keep him in.”
It may not have been intentional, but he liked the results. He began using his Angus bulls with the Corriente cows, but he ended up losing his entire herd to brucellosis in 2007. Since then, he’s experimented with a variety of other bulls with his Corriente cows, including Black Angus, Hereford, and Simmental. He was happiest with the Simmental crosses.
“They were the beefiest calves, with a red baldy look,” he said. “The crosses are still a smaller-framed animal, though, which helps with birthing.” The beef is leaner than a purebred Simmental would produce, but without the different flavor of the Corriente beef.
Morgan sells his crosses at auction to the beef market, where he said they bring “about a dime less per pound” than beef cattle. That’s an easy tradeoff in his eyes, through, because he calculates that the Corriente cows use about 75% less feed than the Angus. He also found that the Corrientes would range farther from water, using dry ranchland that the beef cattle wouldn’t use, which kept the feed costs even lower.

There are two PRCA (Professional Rodeo Cowboys Association) events that use Corrientes: roping and steer wrestling. In both cases, they’re looking mostly for animals that haven’t been used in sport before, as experienced steers know what to anticipate and over-roped steers learn to duck. Note that both sports use steers, not bulls or cows.
The PRCA now mandates the use of horn protectors. These can range from a simple “figure 8” horn-wrap to a padded device that protects the steer’s ears and forehead from the slap of the rope in addition to protecting the horns themselves from being broken.
If you’re planning to sell steers to the rodeo market, keep in mind that the PRCA now has a mandatory weight limit. All steers must be between 450 and 650 pounds, so don’t fatten them up before selling. There’s no incentive to have heavier cattle, anyway, as rodeo people pay by the animal rather than by the pound.
You’ll also want to pay attention to when you calve. A steer is generally ready for rodeo use at 12-15 months of age. Add their 9-month gestation period, and you’ll want the bull in with the cows in late spring to hit the rodeo season two years later.
If you find the rodeo stock companies hard to sell to, you can do very well selling directly to rodeo cowboys who need practice animals.

Corriente beef has more of the color and texture of farm-raised elk. There’s less marbling than other beef, and a somewhat different taste. My family got used to the flavor and texture quickly, and grew to like it, but Corriente beef is not mainstream in America. If you are planning to raise cattle to sell on the beef market, a modern beef breed will be easier to sell and probably net you more profit overall.
If you are planning on raising beef for your own use, Corrientes are an excellent choice: healthy, easy to breed, and less expensive to feed.

← How important is the word “organic”?
Twinings changes their Earl Grey. Stop the presses. Or don’t. →